Boy, flight school this week “flew” by, and yet I didn’t even get to leave the ground! But what a full week of training it was.
It all started on Monday with a rapid round of introductions, and immediately I felt out of my league! Sitting to my right was a 20+ yr veteran helicopter pilot, whom also had flown over 2000 hrs in fixed wing including the King Air, and to my left was a hobby pilot with over 1000 hrs time but on many different types of planes and helicopters. Then, of courses, there was the instructor who is sitting at about 5000+ hrs on King Airs and Beech 1900s, not to mention a lengthy stint on the Challenger jet. I thought to myself, this could be a VERY challenging week.

We immediately jumped into an emmersive training experience in King Air systems theory, starting with several hours on the PT6 turbo prop engine, which was complexity different from any other plane I had ever seen! Thankfully, our instructor is also a very accomplished teacher and he was able to present the engine components with a great visualization that I copied down very carefully and then re-drew later that evening and that really helped it sync in.
Leaving the airport Monday evening, I remember feeling very discouraged but a long chat with Sarah on the way home and a few encouraging text messages with Clay and my other pilot buddy Jason, my confidence was restored for day two.

The second day began with a look at the prop systems and thankfully, that was very familiar with many flash backs to my multi-engine training at ATP and my previous struggles with governors and the dreaded pilot value. Although this new engine had several more complexities with the props, the basic principals were the same and I started to feel much more comfortable with the training.

The next few days were quite a blur, but the training continued and one by one, the systems theory feel into place and my head was getting jammed with exciting new content. Towards the end of the week, it was great to get a change of pace with a different instructor, Cariboo’s chief pilot, leading us through a few more systems and sharing with us her flight experiences. It became very clear that piloting is really all about learning on the fly – every flight presents itself with new challenges and the goal of flight training isn’t to stuff mindless information into ones head but to give the pilot enough problem solving skills to resolve the wide variety of situations that we’ll bump into both mundane and dangerous.

Knowing that the week was going to wrap up with a series of exams; limitations (a straight regurgitation of about 100 different numbers including everything from V speeds to weights and pressurization diffs and max torque) and a multiple choice systems theory, I spent several hours Thursday night cramming and drilling my brain to the point I felt like I couldn’t possibly shove anymore information in!

Today, the last day of training started out with a quick cram session with the other two students, but I quickly realized that their study strategy was very different than my own. I tried to engage with them to stay friendly and supportive, but I quickly found myself getting confused and frustrated so I tied to zone out and returned to my drilling on my wipe-off sheets. Feeling about as ready as we were going to be, the instructor handed out the exams and I flew through the bulk of the limitations exam, but hit a brick wall with one of the sections that I found hard to memorize so I struggled and anguished. Much to my surprise, the instructor asked all three of us how it was going and both the other candidates also indicated they were struggling with this same section so he walked us through it together and that helped relive the stress!

After our lunch break, we jumped right into a systems review and we were able to jot down a few notes to help us along and then he handed out the multiple choice exam and I was again able to fly through that, only struggling on one question where the wordin was a bit tricky. Once everyone was complete, we then graded the exams and I ended up with a 98% on the systems and 97% on the limitations – phew!

As promised, we ended the day with a trip down to the ramp and we all climbed into a Beech 1900 and reviewed the instrumentation system that we would see at SIM – unfortunately again very different from anything I had seen before… flight directors and electronic flight information systems (EFIS)… but at least the GPS was a G430, a welcome friend from my ATP and Cooking Lake Seminole training.

We jumped over to the King Air and we got hands on training with the engine startup and 24h checks and even taxing! Surprisingly, this plane is very easy to maneuver on the ground and the startup procedure wasn’t newrly as bad as I had feared.

Feeling pretty confident and very relieved, we returned to the classroom for our last exercise, a quick review of SIM training and several notes for what to expect on the PPC (pilot proficiency check) ride. The instructor then quickly rattled off all the items that we would be expected to perform and wham, the feelings of sheer dread returned! Clearly there is still lots of work ahead! 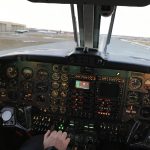 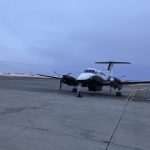 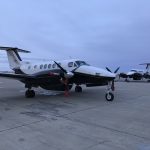 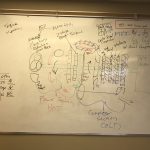 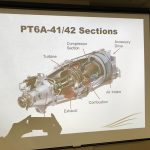 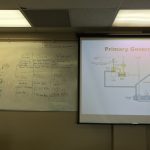