Day two started with a pretty smooth flight from Gateway to Palm Springs and then the clouds thickened up quite dramatically and the weather closed in giving us some solid IMC (instrument meteorological conditions). In our preflight weather briefing we were advised that we could see some clouds on our decent into the LA Basin, but it wasn’t expected to close in as it did. In hindsight, we probably could have called in for an inflight weather briefing as we approached the weather and maybe considered a diversion back to Palm Springs. Oh well, it wasn’t a dangerous decision to continue as we knew the cloud layer wasn’t very thick and that we would bust into warmer skies down lower on our approach.

Once we finally did bust out of the clouds we continued on an ILS approach with the weather continuing to deteriorate and shortly after landing the skies opened up and the rain started. Calling into flight ops we were told that the plan was to have us reverse course after lunch and complete our day with a return to Gateway. However, Mother Nature clearly had other ideas, because as we were eating at the aiport diner, the rain started pouring and the freezing level dropped to below our planned route meaning we would be climbing out through a rain storm into freezing and icing conditions – a total no-go! Calling again to flight ops we were told to wait out the weather and call back a few hours later so we headed over to the local flight school office and settled into comfy chairs closely watching weather updates.

After 2 more hours waiting, we finally got a call from flight ops telling us that we have been grounded for the night in Riverside and that they would be checking us into a local hotel and we would try our return flight to Gateway tomorrow am. Now settled into our hotel, we are relaxing in the hotel lobby while I return to the work world for a few hours of emails and websites before retiring for the night. My first official weather layover as a pilot! 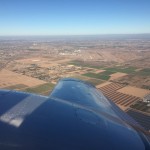 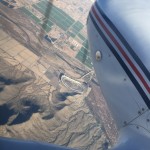 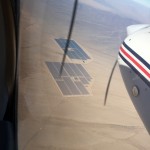 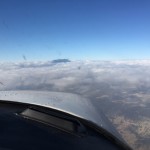 On Top of the Clouds 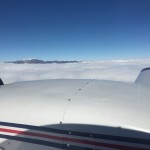 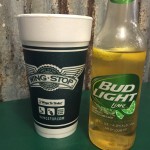