A quick phone call to flight ops the day before confirmed that I could be out for up to three nights. I then connected via txt with my fellow student, and started flight planning our first cross country leg to North Las Vegas airport, a small municipal airport on the north side of Las Vegas, unfortunately several miles from the glitz and glamour of the strip.

An early morning scheduled flight ended up seeing us with about a 2 hr delay as we had to wait for the frost to burn off the planes flight surfaces. Finally cleared for take off, I took the controls and flew as PIC up to Prescott and then over the mountain pass and along the south rim of the grand canyon and over lake Mead.

The flight was pretty bumpy with some continuous turbulence at the higher altitudes over the mountains and we fought about a 30 knot headwind making the journey a fair bit longer than we had planned. Nearing Las Vegas we requested a GPS approach into the airport as we were advised by our instructors however during radio handoffs from approach controllers our request got bungled and at one point the controllers had us on an approach into the big McCaron international airport instead of our intended destination. After a few tense moments we finally got things sorted out and were cleared for a GPS approach opposite to the active runway which was a bit tricky and which tower terminated early requiring me to fly a circle to land which i was able to execute perfectly landing smooth and taxiing off to the parking lot. A few deep breaths later, we secured the plane and unloaded our bags and checked in with flight ops for our next leg and were advised that we were headed back to Gateway for the night – yay supper with the family and night in my own bed!

Meeting up with another student at the Las Vegas ATP office, he offered us a trip over to the local taco shop for a quick lunch during which we planned our return flight – happy to see strong tailwinds in the weather briefing.

Loaded up we took off, with me flying copilot, and we directed by ATC directly over the Strip and over McCaron with great views of jets landing and departing below us. The flight home was pretty uneventful back on a very familiar route. With day one behind us, and a bit of a stiff back and tired legs, I logged 5.9 hrs flight time with about another 30 more to go on these cross country flights.

Tomorrow we are slotted for an early fly to Riverside, CA – another new airport! 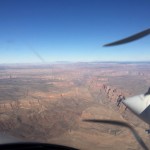 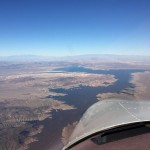 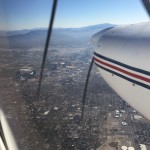 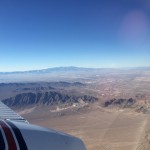