Just finished my first day flying the 1900, what a fantastic airplane to fly. So much power and finally some real instruments on the right side. Flying with a flight director makes a huge difference on the pilot workload, especially when flying instrument approaches in full IMC. As long as the flight director is properly managed the the pilot just has to “fly the bars”.

I was pilot monitoring on the first leg and really didn’t notice much difference in the role on the 1900 vs the 200 except things happen at a much faster pace because of the increased speeds.

I then flew the second and third legs of the day into YEG and YYC respectively. Knowing the weather was pretty poor, I was a bit worried about flying the full approaches to minimums in the new plane, but my captain talked me through the power configurations and then it was just a matter of letting the avionics do the work and I had to just follow the command bars with precise movements on the controls.

We broke out into YEG about 100 ft above the decision altitude and I proceeded to the landing and was met with a bit of a tricky crosswind. The landing was smooth but I ended up a bit off centerline which was a disappointing but the captain was pleased with my first attempt.

On the flight to YYC, the weather was much of the same so I had to fly another ILS but this time I was better able to manage the powers on my own and flew the approach very well and transitioned to another smooth landing, on center line.

The captain said he was very pleased with my first day, which felt great! I can’t wait go get through all my training flights and be able to fly most of my future flights out of YEG. I hear there should be several fishing charter flights this summer from YEG on the 1900 so those would be great views and fantastic experiences. 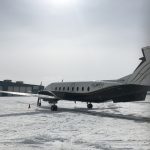 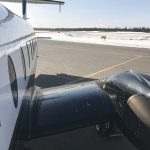 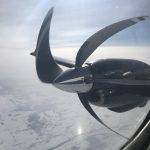