After talking with my management team at Cariboo, I was encouraged to keep up with my multi-engine, instrument, pilot in command time, so I called up my instructor Ben and planned a flight in the clouds to Slave Lake. Seems like late summer is a great time for some instrument time as long as the storms aren’t brewing. Today there was a broken cloud layer at 7000 ft so I planned and filed 8000 hoping to spend most of the flight in the “soup”.

I decided to take the outbound flight from the right seat (trying to simulate a First Officer role), however, I quickly realized that this wasn’t a great idea as the plane we were flying today had all the instruments right in front of the left seat and I had to spend the entire flight glancing to the side to monitor the instruments. I did find this very challenging and ended up chasing the instruments much more that I would have liked. Although initially, it was also very tiring, I did get used to it and continued the flight without issue.

On the approach into Slave Lake (CYZH) we realized that we were going to be performing the approach in full on instrument conditions, but that it sounded like we would be able to bust out of the clouds right around the minimums (500 ft). This was going to be exciting! I setup the instruments and flew the approach, happy to start getting a glimpse of the runway lights about 200 ft above minimums.

The landing was not great, but safe, and it was a rainy taxi to the tiny terminal where we stopped for a bathroom break and re-filed our flight plan for the return flight to Villeneuve, and eventually back to Cooking Lake.

The return flight was for the most part in the clouds so we planned an LPV (GPS approach with vertical guidance) approach into Villeneuve, where there ended up being a kids intro to flying event and airplanes ALL OVER THE PLACE. So we quickly closed down the flight plan and requested a VFR departure back to Cooking Lake.

A nice smooth landing was a great way to wrap up a very exciting and challenging flight – great experience! 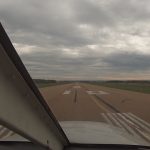 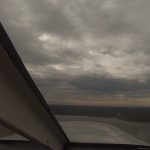 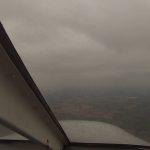 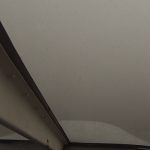 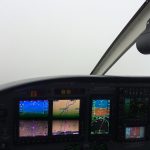 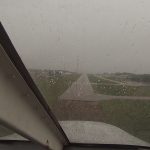 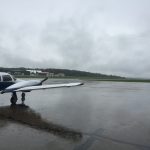