Today marked an exciting milestone…  my first passenger flight, to retrieve Simon from his spring break holidays with my sister Kristy in Fernie, BC. Not wanting to fly into the mountains with strong winds, we decided to meet up in Pincher Creek, AB – a one-hour drive from Fernie, BC. Also not wanting to make the trip on my own, I called up a low-time pilot buddy, who works with me a Cariboo, and we headed out on the big adventure. Filing a VRF flight plan, straight south to the Calgary Airport (CYYC), and then straight south to Pincher Creek (CZPC), we took off from Cooking Lake airport and I put my foggles on to pick up some coveted simulated instrument time for my logbook. 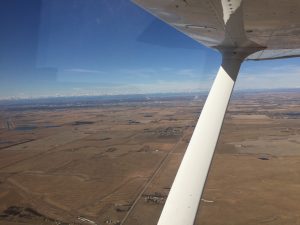 Nearing the Calgary we were advised by ATC that we would have to make a slight diversion to our flight plan as the Calgary Airport was using the north-south runway and that we would have to descend to a lower altitude and would be vectored to the east, well away from the flight path of the arriving aircraft. So we quickly descended from 8500 ft down to 5500 ft at which time our previously very smooth flight turned very bumpy as we encountered very strong west-east winds which brought quite severe turbulence for our little plane.

Continuing our flight south, we persevered through the bumps and I prepared to fly the simulated GPS instrument approach to runway 25. Once we picked up the weather conditions in Pincher Creek on the automated weather observation station (AWOS), we learned that we would be encountering very strong winds through the approach and into the landing. Winds were reporting sustained at 25 knots with gusts up to 35 knots, but the winds were coming from a heading of 260, essentially right down the pipe (runway). A condition that would make the landing pretty tricky but not impossible.  Had the winds been offset from the runway at any greater angle, we would have had to call off the landing and divert to High River airport where the winds were significantly less. So we pushed on and picked up the approach at the initial approach fix and followed the approach down to minimums and prepared to make our landing – with the intention of using less flaps and a slightly higher approach speed.

I flew a stabilized albeit slightly bumpy approach and proceeded to rotate and flare the plane as planned and entered a lengthly float down the runway as we bled off airspeed and prepared to touch down. Fighting the gusts to maintain centerline, we were taken by surprise when the gusts died down and our plan dropped the final few feet quite suddenly and we touched down with a firm three-point landing. We taxied to the small terminal and secured the plane facing into the strong winds and waited for Simon to arrive. After a quick visit with Kristy and her family, we loaded Simon and his gear into the plane and we filed the return flight plan which would take us along a north west heading toward the Springbank airport where I would fly another simulated instrument approach. 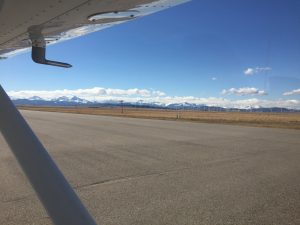 Seeing the HUGE windmills just past the departure end of the runway, I decided that we would be using max-climb airspeed to gain altitude and easily miss the obstacles. With the strong headwinds, we had no troubles climbing very quickly and were rewarded with a great view of the rocky mountains and the Crowsnest Pass valley. I put back on my foggles and continued the flight in simulated instrument conditions which proved to be far more realistic that I had even planned as the strong winds continued to pound our little Cessna giving the sensation of being in turbulent air of the clouds.

Checking in on Simon in the backseat, I learned that he was fighting air sickness because of the bumps and that he was going to try to sleep through the rest of the flight. Sneaking a few quick glances out at the amazing views of the rockies, it was breathtaking. ATC then handed us off to Calgary Terminal as we prepared for the ILS into Springbank (CYBW).  I briefed the approach of my iPad and setup the instruments and were quickly handed off to the Tower controllers. Shortly after connecting with the tower I realized that the instruments were not responding as I had anticipated and we were not picking up the glideslope (our vertical guidance) but we were picking up the localizer (our lateral guidance). As per protocol, I advised the tower that we were having troubles with our instruments and that I was going to proceed with the approach with a stabilized decent to the localizer minimums. Tower responded with confirmation and advised that we were still within the “green” meaning our approach was within the accepted glide path and that I could continue the approach. Reaching minimums, we advised Tower that I would be flying a missed approach and would be departing the area to the north.

The remainder of the flight went off almost without a hitch, that was until Simon advised us that he was going to be sick so we quickly scrambled to get him a “sic-sac” and he made good use of it over the town of Wetaskiwin. Safely back on the ground, Simon quickly regained his vestibular balance and was happy to be able to scoot around the ramp on his scooter.

All in all, it was quite the adventure with some great experiences and continued to instill in me my love for flight. 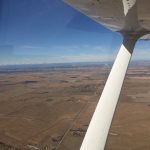 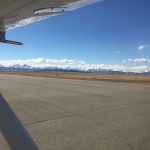 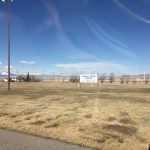 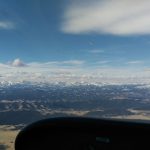 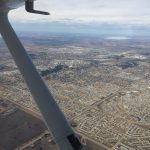 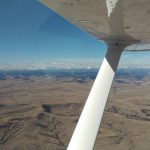