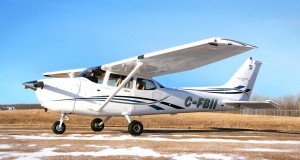 After waiting over 6 months to get my US FAA pilot licenses transferred to Transport Canada license, on the day my license arrived in the mail, I immediately booked a check-out on type at Cooking Lake Aviation in a Cessna 172 with a G1000 avionics package. Connecting with the flight school, I lined up the flight with their chief flight instructor Ben – with whom I hope to eventually start my flight instructor training with.

I arrived at the airport and checked in with flight dispatch and started the paperwork and pre-flight routine and had a quick briefing with Ben. Our plan for the flight was to head out to the practice area and perform some routine maneuvers, some simulated emergencies, shoot a GPS approach, and then return for some landings. With this being only my second ever flight in a G1000, and about 16 months since the previous, not to mention over 5 months since even being in a plane, I was a bit nervous to say the least. Loading up the plane and finally settling into the pilot’s seat, I quickly found my comfort levels returning quickly and I taxied and performed the takeoff without any hiccups.

The flight over to the practice area took us right over the cabin on Hastings Lake and then within view of the town of Tofield, two very familiar sights that further helped to calm the nerves and I quickly learned to adapt my instrument scan for the new glass cockpit. Ben asked that as soon as I was comfortable, to start into a series of steep turns and despite a few rocky starts I was able to successfully perform the maneuver – one that I have always struggled with despite the plane. We then moved into a series of stalls and stall recoveries and those I nailed first time which felt good. Our last maneuver was a simulated engine failure and forced approach to landing which again was very smooth and even gave me a chance to practice a forward slip to help setup the approach to the field I had selected as my landing area.

With the maneuvers wrapped up, we climbed back up and setup for the GPS approach to runway 28 back into Cooking Lake Airport. It was very easy to load and fly the approach using the G1000 and being able to set in the minimum altitudes sure took some of the workload off. Ben also helped me through my first approach using the Transport Canada instrument plates – which are quite different than the FAA plates I was used to. We broke off the approach at the circling min and proceeded to fly a standard traffic pattern and landed on rwy 10 with a smooth flare, float, and touchdown.

Returning to the flight school, we finished up with a short briefing, I completed the written checkout test (open book thank goodness) and then wrote my Industry Canada Radio license test, capping off a LONG but very successful day. As I drove away, I was already planning my next flight, which Ben suggested be a cross country flight for me to spend some more time with the G1000 and learning to use the integrated autopilot functions.