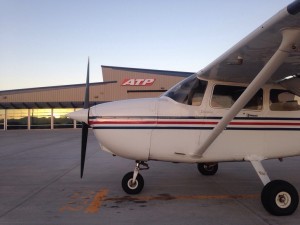 Yesterday, my first day back flying in over a week, saw a rather dramatic change of pace. After spending a good while with my new instructor (#7 in all) reviewing my logbook and previous training, we determined that I was going to need about 0.9 more hours logged before I could start commercial multi-engine training. However because the Seminole is significantly more expensive per training hour, it was decided I would just borrow an hour or so from my single-engine commercial training – which will begin right after the multi. So, we loaded up into the old Cessena 172 – actually the very plane that I had my first ever flight in – and we headed out for an hour of take-off and landings training.

Pre-flighting the plane brought back lots of memories and I quickly found myself running through all the checklist items almost entirely from memory – like riding a bike! I did however have a small gotcha moment when the instructor interrupted me just as I was about to head over to the runway and asked if I was going to do a run-up – DOH!  The most important component of the pre-flight and here I was so anxious to get back into the air that I somehow skipped right over it in the checklist. After a short chuckle and me knocked back down to earth, I did the run-up and we headed off.

The airport airspace was quite crowded at the time so we were a bit fearful how smooth everything was going to go and how many landings we were actually going to be able to accomplish in the short 1 hr window. The take-off roll and lift-off seemed so much slower than I had been used to going from 75 knots all the way down to 55 and it hardly felt like we were moving once we took flight. Then came the first Cessena landing in over 5 months and while on short final, I found myself right exactly where I needed to be and touched down very softly and right on center line for a perfect landing.

It was a great sense of accomplishment to return to a plane I hadn’t flown in months and to have it all come flooding back – and that’s when my instructor said that’s because I am only a few days away from being a commercial pilot!

Tomorrow I hop back into the Seminole for 6 more hours of multi-engine flights before my commercial multi-engine checkride next Wednesday. These 6 hours are going to pass by really quickly as we hone in on the private maneuvers and add in a couple new components for the commercial pilot. And on top of the flights, I have one more written exam to write, which I plan to do on Saturday evening after a dedicated full day of study – like I did last time for the Instrument written.

PS. my new instructor is a real blessing, probably the best so far by a long shot.  His personality, his demeanor and his confident flying skill are a real treat and its fantastic to be wrapping up this training with him.