Intrument Training Half Over

So it’s been a while since I last posted about flight training, but rest assured I have been hard at work he whole time digesting all this new knowledge and mastering all the new skills of instrument flying. Still most days it feels very overwhelming and really takes me back to my early days of private training where everything felt new and the sensations of being overwhelmed and lost where only a breath away. While I can say with all confidence that my flying skills are very strong and overall I have a very good command of the plane, juggling all the added work of instrument flying is proving immensely challenging. And probably non more challenging than getting the eyes to read and brain to understand very complicated charts, diagrams, and instructions while constantly scanning the instruments and maintaining proper headings and altitudes.

Tonight we first flew to Marana performing a GPS circling approach (runway 12) where we followed our GPS navigation and descended out of altitude to a minimum height and then decided to circle the airport to land on the opposite runway where the winds more favorable. Since this was the third time on this approach, it started to feel quite familiar but this time my chosen route to circle the runway was too close to the runway and our final approach needed a rather dramatic maneuver to realign the plane with the runway – which I did but it was a fair bit more nerve racking than it should have been had I flown a bit further away from the runway.

After a quick touch and go we headed back north toward Casa Grande and prepared for the ILS approach into runway 5, which would be my first approach and landing at this airport. With the short distance enroute everything happens so much faster and out comes another approach chart to digest with routes and altitudes to memorize and fly. Coming down to our decision altitude, about 300 ft above the runway, I looked out and saw for the first time the approach and runway lighting, which was quite a sight.

Without more than a few seconds on the runway, I pushed full power and did another quick touch and go landing – which are way more exciting in the Seminole than the Cessna given the much higher speeds.

We then headed over to Coolidge and lapped the town a few times setting up for our final approach of the night, the ILS 30C back into Gateway (see the chart below). With yet another chart to review and more points and altitudes to quickly memorize, not a moment was lost. Once the approach briefing was complete, I called up ATC and requested the approach and was guided toward the airport as I setup on the approach tuning in the localizer and picking up the glideslope on the instruments. Once established on the final descent, I found it quite easy to hold the plane on course both vertically and laterally right down to the touchdown zone.

So while there is still so much to learn and even more to really get comfortable with, the big wins of the night were very good flying of the final ILS approaches and good communications with ATC and two smooth touch and landings.

The adventures continue, and thankfully I am now about half done the instrument portion! 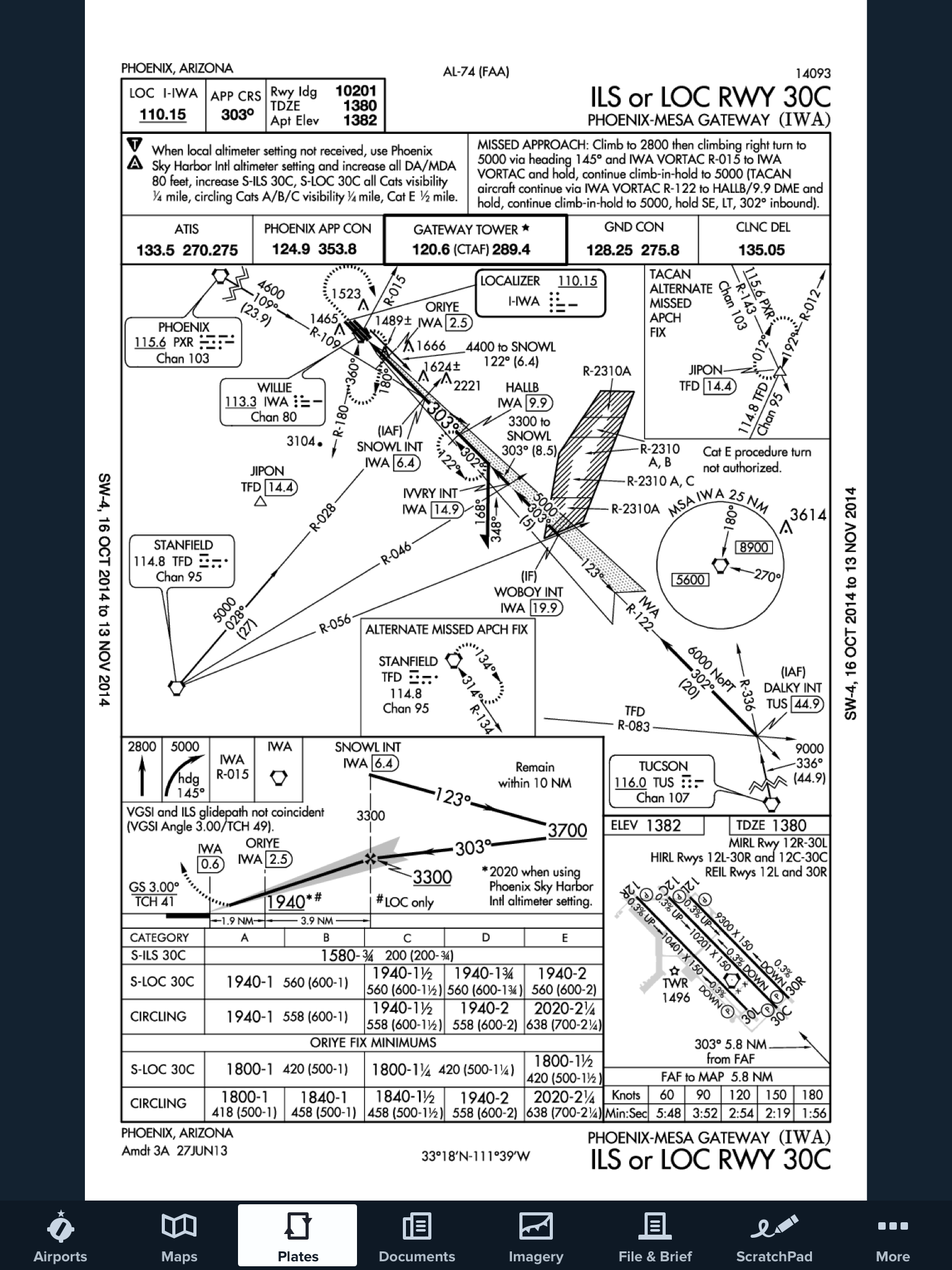