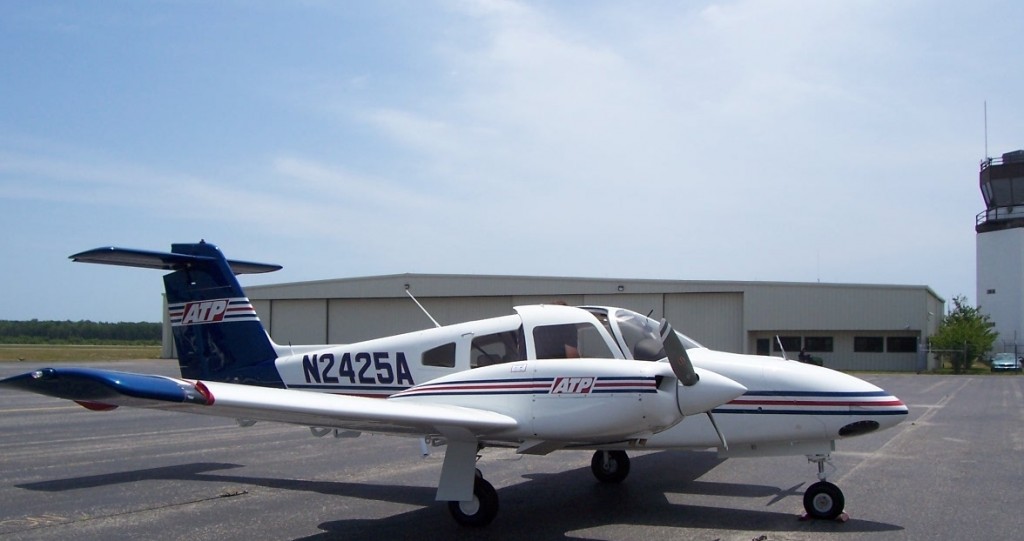 After finishing my final multi-engine training simulator session, we headed out onto the ramp and learned how to pre-flight a Seminole airplane – which is a fair bit more work that the Cessna as there are many more systems.

Once we had it all pre-flighted, I followed the checklists and started up the first engine (left for the sake of convention) and then the right, and despite them being almost identical to the Cessna (180 HP), its instantly easy to feel the additional power the engines produce together. In the Seminole, we have variable pitch propellers meaning that from the flight deck, we can control the angle that the prop meets the air with helping to produce more or less overall power as needed for the various stages of flight.

My first challenge with the multi-engines was taxing as if the props aren’t set to identical power (manifold pressure) and RPM settings, the produce more or less thrust resulting in the plane wanting to be pulled in that direction making the steering pretty tricky. Fortunately, our first taxi clearance had us taking the longest taxi route to the runway so I had plenty of time to get experienced with it and it later became quite straightforward – I have learned never to say EASY when it comes to aviation.

The run-up procedures in a Seminole are also more complex as we have to check both engines together and then separately and properly setting the plane up for take-off. We then proceeded onto the runway and my instructor performed the first take-off while I followed along with my hands and feet on the controls and it was a bit of an adrenaline rush to feel the additional power result in significantly faster roll (75 knots) and lift-off speeds (80 knots) vs. the Cessna (55, 60 respectively). Shortly after lift-off, I took over on the controls and flew us over to the practice area. Because my new instructor is also new to to Phoenix, he is still a bit unfamiliar with the procedures at Gateway so I was actually able to give him some pointers and tips about landmarks in the practice area.

The whole goal of these next 4 flights is to prepare for the FAA Multi-Engine Practical Test Standards (check-ride), which I am scheduled for next Monday, so we quickly started performing the required maneuvers, which incidentally are the same maneuvers that I had to do for my single engine check-ride only a few weeks ago. Starting with steep-turns (simulating quick turns to avoid air traffic), we then moved into slow-flight (simulating the slow speeds on approach and landing), followed by power-off stalls (simulating landing) and power-on stalls (simulating take-off). As is pretty obvious, the maneuvers are intended to get us familiar with the more delicate phases of flight allowing us to experience the physical sensations, airplane configurations, and to practice the required recovery techniques. I quickly felt myself remembering the maneuvers in the Cessna so I didn’t find them all that difficult, although the faster speeds did make them a bit more challenging.

After the basic maneuvers, we turned our focus to emergency procedures simulating an engine failure, wing fire, and emergency rapid decent. Again the intent of these is to ingrain in our minds the recovery techniques so they start to become second nature so we can immediately deal with them should they ever arise vs. getting overwhelmed and stumbling. The good news is that there are a few basic first steps that we have to memorize and perform quite quickly as needed and then we basically set the plane up for continued flight while we follow a detailed checklist to either troubleshoot the emergency to prepare to land asap.

We finished the flight with me maintaining controls right up to the touchdown point and then my instructor taking over to allow me to experience the landing feelings. On our next flights, I will be tackling the takeoff and landings myself and from what I can tell, the landings should be much easier as the Seminole doesn’t have the float that the Cessna’s do so its more of a controlled touchdown than a glide – which in windy conditions can be problematic.

I did however, find that flying a low-wing plane felt quite a bit different as the plane seems to bob and jump a bit more laterally in the thermals vs. Cessna where there is more of a floating feeling as we hang from the wings. However, when we got up to the significantly increased speeds (cruise at 140 knots vs. 100 in Cessna) that those sensations dissipated and the flight felt more like a real sturdy airplane ride.

I am excited for my next few flights to really learn to master the maneuvers and emergencies procedures. 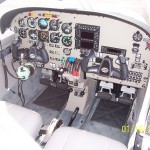 Cockpit – much smaller than Cessna 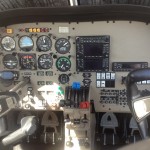