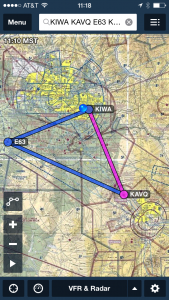 Another solo adventure accomplished, and overall a very smooth and uneventful flight. What a difference it makes when its all on me. This time, I was actually able to enjoy the views and relax just a bit enroute.

Taking off out of Gateway as the sun was rising, it was about 10 degrees cooler today at just over 80 (27C) making for a nice smooth takeoff and flight south toward Tucson. Shortly after departing, I was able to pick up flight following with Phoenix Approach who guided me safely southbound until I was picked up by Albuquerque Center radar center who later handed me off to Tucson approach. A very comforting feeling being on a professional controllers radar screen for the entire flight. Although the skies were not every busy, having the extra set of eyes on my plane gave me peace.

I then landed smoothly at Marana Regional Airport (about 15 mins north of Tucson), grabbed a quick snack from my bag and loaded up on water from my Camelbak for the next leg over to Gila Bend. Taxing around an airport other than my home, reinforce how much responsibility is on me as PIC and to comply with local procedures and standard protocol. Rejoining Tucson Approach, I was guided out of the Tucson area and handed back off to Albuquerque Center who were with me almost all the way to Gila Bend.

As this leg of the flight is the least eventful with little other air traffic, I used this time to soak up the views and enjoy the flight. With no one in the right seat, the cockpit is a bit more roomy and I was able to enjoy the vented air and stay cool and relaxed. Having the Camelbak water backpack is a real treat for quick sips staying good and hydrated to help reduce stress for the upcoming landing.

Approaching Gila Bend airport is always a bit stressful as it is a small but busy airport with student pilot traffic and today was no exception. There were three other student pilots in the traffic pattern but for the most part everyone followed protocol and I was able to get down safely. Good thing winds were calm as they are known to pick up in that neck of the woods and with the heat, further complicates landings.

With the heat creeping over 100 at Gila Bend, I was happy to grab another quick snack and water and get back in the air and on with flight following radar services back to Gateway. The air traffic controllers are very kind and helpful and really make a difference when flying solo. Also being on with Phoenix Approach gave me a good idea of what radio traffic is like around a big airport and helped prepare my ears and brain for the chatter I will have to get very used to one day. I think in all, I was in direct radio contact with about 10 different controllers who kept me good and safe throughout the journey.

Approaching back to the Gateway area, I realized I was a bit ahead of schedule so I ventured over to our neighborhood, which is only about 5 miles out of the way, and I was able to overfly the house and snap a few pics before heading to the airport for another smooth landing 6 for 6 on the day.

With my first cross country solo now complete, I have checked another item off my training list and I get to do it all again tomorrow on my way to a total of 10 hrs of cross country PIC time. Sounds like if the weather holds for the rest of the week and I am able to check off the next two cross countries and my check-ride prep, I should be on track for my practical exam early next week. YIKES, time to get back to studying. 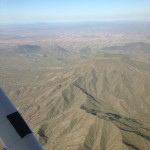 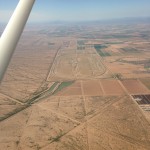 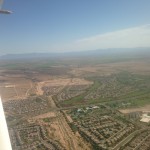 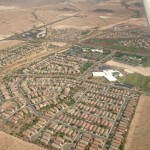 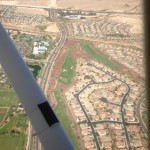 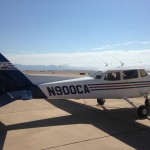 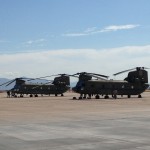