Just returned from my first solo adventure – three loops around the airport and three landings all by myself. It was a very exciting yet very familiar feeling as nothing changed other than having an empty right seat. The training is now so ingrained that regardless of the instructor not being there, I still had to do everything exactly as I have for the over 150 prior landings.

In short, I am very pleased that I waited the extra day to conduct this flight. Today the air was calm, landings were smooth and radio communications were perfect and it all resulted in a great feeling of success.

Tomorrow I embark on my first cross country solo, heading down to Tucson and then over to Gila Bend, the same route I have take many times now, but this time I’ll be the only one on board and I’ll be soaking up the feelings of accomplishment along the entire route.

Here are a few pics of the big day! 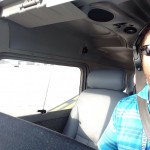 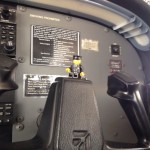 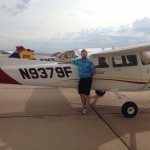 The tradition of cutting the tail of a shirt, we turn to wikipedia… 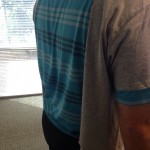 In American aviation lore, the traditional removal of a new pilot’s shirt tail is a sign of the instructor’s new confidence in his student after successful completion of the first solo flight. In the days of tandem trainers, the student sat in the front seat, with the instructor behind. As there were often no radios in these early days of aviation, the instructor would tug on the student pilot’s shirttail to get his attention, and then yell in his ear. A successful first solo flight is an indication that the student can fly without the instructor (“instructor-less” flight). Hence, there is no longer a need for the shirt tail, and it is cut off by the (often) proud instructor, and sometimes displayed as a trophy. Full story…