This afternoon I experienced first hand the enormous trials of flying in Phoenix as a result of the extreme heat which by late afternoon generate incredible “thermals” which are areas of significant lift which can cause havoc with small planes especially on approach and landing.

We started out on our second flight of the day in an attempt to fly some traffic patterns around the Mesa Gateway airport and practice landings however it quickly became obvious that because of the perfect storm of conditions was aligning to make it a very tricky flight. With very unstable air in the region immediately after takeoff we were quickly tossed around flying over empty fields and then large roads and developed land resulting in the thermal lift we read about in aviation books but experienced first hand is enough to really shake you up.

Once I got stabilized in the pattern it was time for a landing which seemed to set up quite well however when I approached the runway on final approach I caught even more thermals off the San Tan freeway that shot us straight up about several feet in a matter of seconds resulting in a significantly higher approach that was unrecoverable and forced a go around, flying over the runway and back into the pattern to try again.

After two failed approaches and go around I decided to extend my downwind leg significantly in an attempt to give me a longer approach and more time to make adjustments for the thermals, which I did, and actually managed a decent landing. However my excitement was short lived as on subsequent approaches I encountered significant cross winds making very difficult landing conditions and after another balked landing we decided to call it a day to chalk up the lessons learned and try again another day.

Although it was very frustrating it was a good experience in summer flying conditions in Phoenix and most pilots say if you can learn to fly in these kind of thermal conditions you can fly anywhere.

For those interested, below is a little diagram to explain thermals… 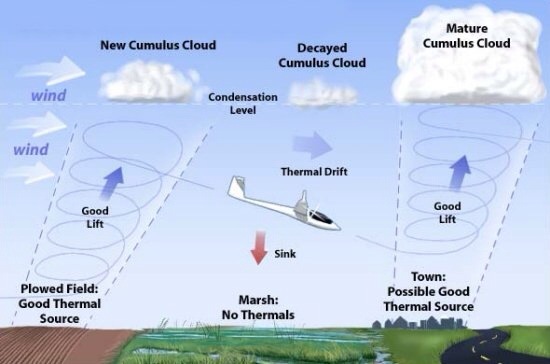